It great to see everyone again over the weekend although it was a shame the weather wasn’t a bit better after all the fabulous weather we’ve been having recently.

The TCR marquee was well used throughout the weekend and fulfilled a wide range of functions e.g. club house, canteen, shelter and even dormitory for that afternoon nap. 😉😁

Special thanks to Peter, Sarah and Selina for settling it all up on Thursday, David and Jo for the excellent coffee and Peter and Sarah for packing it all up again. We couldn’t have done it without you. 👍🏻👏👏

Very much looking forward to Croft next weekend when we’ll do it all again. 👍🏻

Beaten to it by Paul once again!

Silverstone was a really great weekend, which Morag and I enjoyed tremendously.  Sure, the weather could (easily) have been kinder, a fact made all the more galling by waking up this morning to blue skies, no wind and warm temperatures.  But that's the nature of the game - and the European weather map made for that rare thing, a genuinely entertaining German GP to watch in the evening when we got back.

The real fun was at Silverstone though, and a huge thanks to all involved.  The stand and marquee were perfect, the hardstanding for a change was very user friendly, the coffee was great and as for the pistachios, well... It's no exaggeration to say that the TCR stand was far and away the best representation of Cobras, in the best position and with the most impressive display of cars.

Sorry we won't be at Croft, but this week we're having a couple of recce days for the '21 road trip.  All will be revealed in due course.

The Cobra Register - Historian
Several old bangers, which used to include a 289
fbhvc.co.uk
thesahb.com

Thanks to Sarah and Peter, for setting up and putting up with us for the weekend. Here is some pic's for those who missed out. I think we put on a good show of cars despite the weather. It was good to see every one fit and well.

That top picture came out well didn’t it Barry. 👍🏻

Yes Paul, very pleased with it. It's not even been edited yet that's straight off the camera. 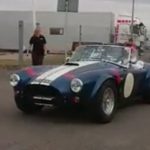 It was good to see every one fit and well.

No online members at the moment